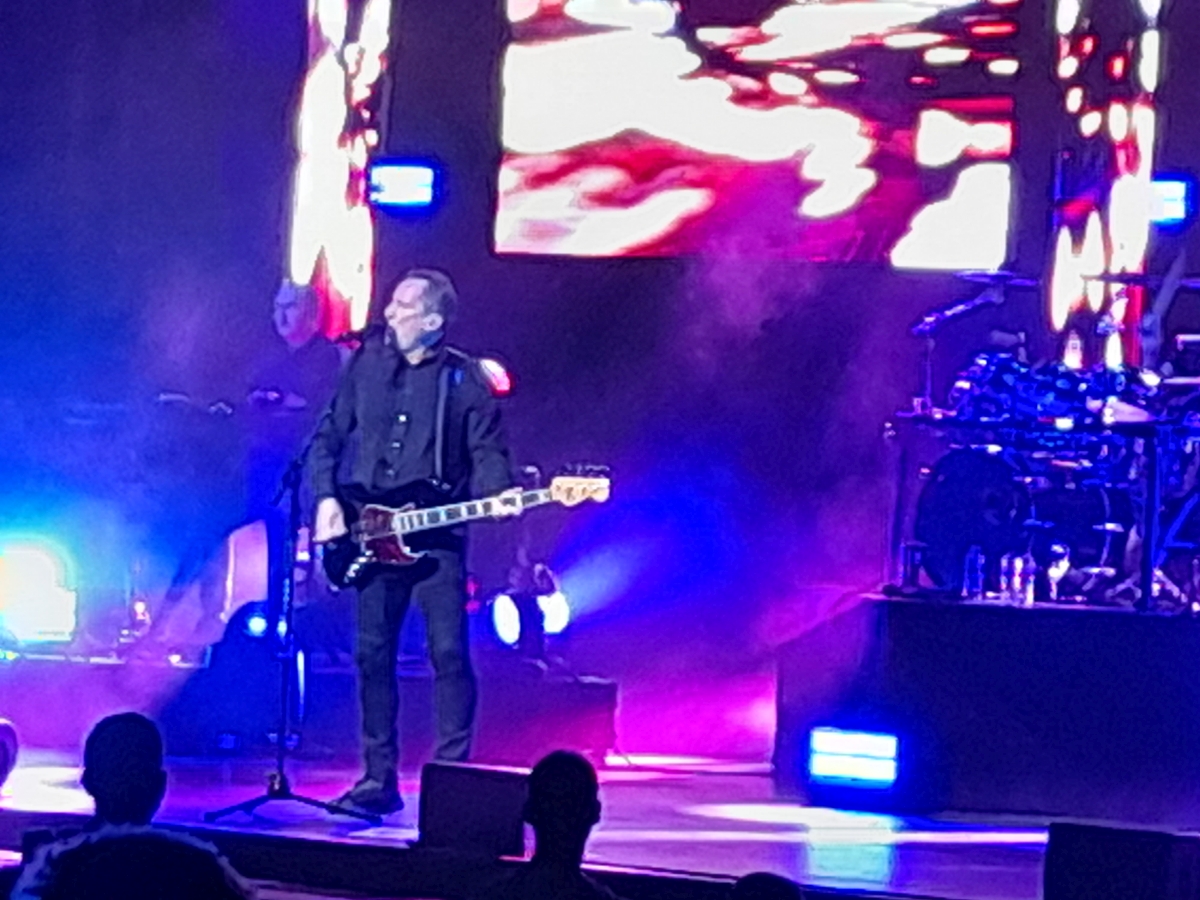 No strangers to the Liverpool Empire. Wirral electro legends OMD return once more on a freezing Sunday night to warm the hearts of long-time fans and take a well-crafted journey down memory Lane. Del Pike was there, all wrapped up.

Stealing Sheep open with a tight set that reflects the sparse atmosphere of OMD’s early outings, replete in oversized neon pink dungarees and Boys Don’t Cry eye lights, peering into the darkness. The oft serious nature of their unique sound is balanced out with excursions into the absurd.

At one point Beth dismounts the stage to encourage clapping, running through the audience, whilst the finale sees the suits inflate as they bounce in unison in what feels like a tribute to both Stop Making Sense and New Order’s True Faith video. Delightful.

OMD appear to majestic visuals of austere architecture and crashing waves visible through billowing smoke machines, Andy McClusky standing stock still amongst the drama. When the first suite of songs begin, a non-chronological and incomplete journey through their third album – 1981’s Architecture and Morality, we are reminded of a time when OMD could easily rival the likes of New Order and even Kraftwerk. At one point McClusky reminds of his pivotal moment in 1975 when he sat on row Q in the Empire seeing Kraftwerk for the first time.

It would take an ice-cold heart not to relish these early tracks, Souvenir and Joan of Arc alone recall so many teenage house parties and school discos whilst the non singles album tracks are valid components of the early UK electro scene.

Unlike such contemporaries as New Order and Depeche Mode, OMD somehow didn’t develop as creatively, and later work lost the spirit of electronica to chart friendly pop. Tracks such as Locomotion and Tesla Girls (No No No!!!) are even more queasy to hear as they were in that mid 80s nadir and the Paul Humphrey’s vocal outing, (Forever) Live and Die, reproduces the sickly-sweet over-production of the era.

McClusky’s physical enthusiasm (read Dad dancing) is still a thing, often a hilarious thing, an elephant in the room that he gets around with self-mockery – “It doesn’t get any prettier, but it keeps me fit”, and in more anthemic moments such as Pandora’s Box and Sailing on the Seven Seas, his bodily euphoria raises these latter-day pop hits to anthemic status.

A late appearance in the set of Enola Gay and the inclusion of Electricity in the encore justify why The Empire is packed out tonight. OMD have had some sparkling moments in their career of over 40 years, but in a greatest hits package like tonight you must take the crunchy with the smooth.

Any criticisms place me in the minority I fear, as tonight felt like a real heroes’ homecoming with enough love in the room to raise the Titanic.