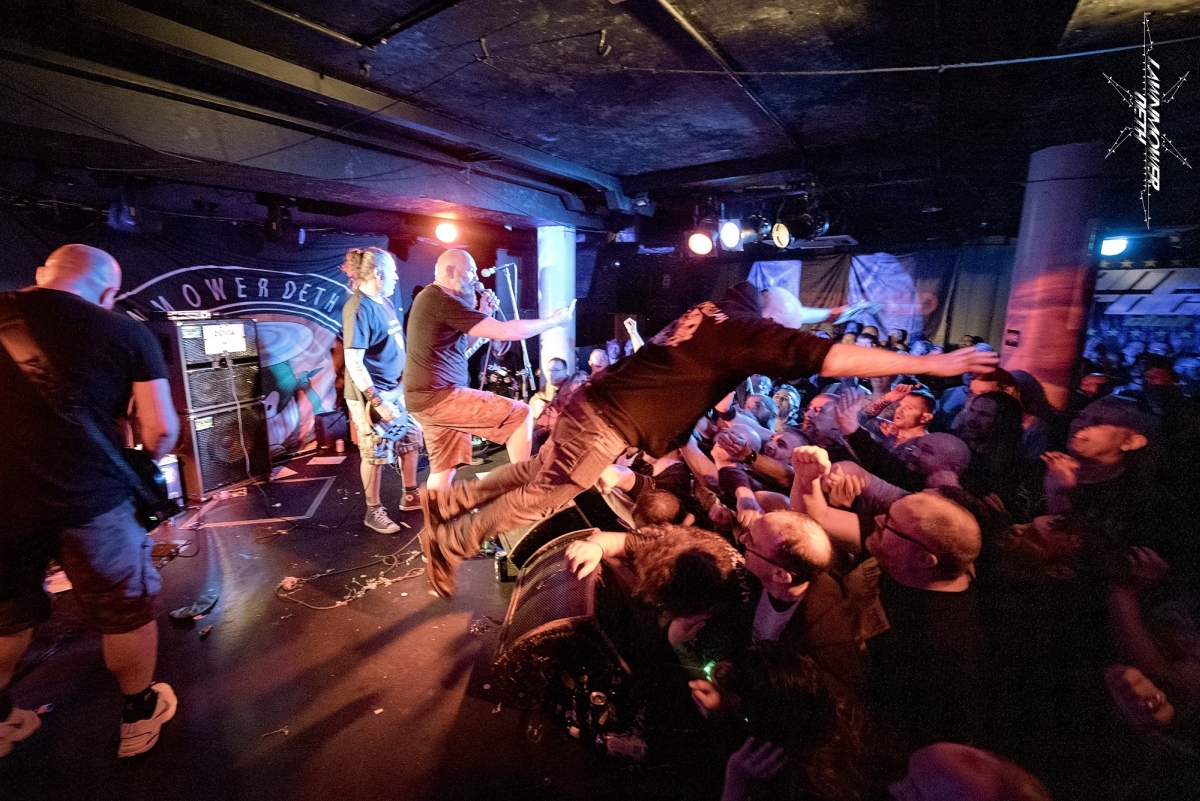 Infamous for many things including chance Radio 2 airplay and a cover of Kim Wilde’s Kids in America, Lawnmower Deth would probably have disappeared from the ether many years ago. But the world wouldn’t let them.

We’ve long been fascinated by the, quite frankly, bizarre stories that surround Lawnmower Deth. Their chance formation, the love shown to them by Radio 2 and their collaborations with Kim Wilde, yes, that Kim Wilde.

None of which are your usual fare for a metal band that doesn’t take itself too seriously.

What will happen going forward will be in true Lawnmower fashion. Unplanned, not thought through and generally waiting for the phone to ring is life in LMD with a large dash of never expect the expected. If it’s interesting, fun, challenging or a different way to do things, they’ll be there.

A post on Facebook a little while back gave us the prompt we needed, so we sent a message to the front man, Pete Lee. He was happy to talk, so we did. He has tales to tell.

Pete: Well, I live in one of these chuffin’ windows, like everybody else. Zoom meetings all day long. I’m always early. On time is late.

Pete: Sat in a room on bloody Zoom, like the rest of my life. I’m somewhere near Clitheroe, not a million miles away from you. Just finished work and thinking about having my dinner. In nice, rural, sunnyish Lancashire.

P3dro: We’ve been to a few gigs at The Grand in Clitheroe.

Pete: It’s one of the greatest venues, but in the wrong place. I’ve been to a few gigs there. I saw Half Man Half Biscuit there. They were tremendous. It was all very polite, like gigs in The Grand are. The Fall played there. Some of the old punk bands have turned up there.

P3dro: So, tell us about the history of Lawnmower Deth.

Pete: It’s like a bad stain that doesn’t go away, I think. The story is probably better than the reality. Lawnmower Deth was never supposed to be a band. Back in 1986/7 our drummer was in a band called Scrawn, who couldn’t get arrested in a phone box. But, they were kind of OK. That post new wave of British heavy metal. They were alright. They could play, but nobody was interested.

So, he got increasingly irritated with no coverage and no one would give them a record deal. He had a complete melt down and had a strop about it. So, he thought: “Right, if nobody will write about it, I’ll make up the most ludicrous band and see if anyone [will bite]” So, he invented Lawnmower Deth. He recorded a demo, which was him just kicking instruments on his bedroom floor.

It was just a noise affair, but people started ordering it. Then he told them he was going on tour on about 30 fictitious dates. Two of us saw the dates and thought: “That sounds brilliant. We’ll have some of that”. And then we found out it wasn’t a real thing. He panicked, a mutual friend knew who he was and we were introduced. We said, let’s do it for real, so we did.

So, that’s how it started, with this totally made up piece of nonsense. The three of us got together, had a quick play for about 10 minutes, decided that would do and we got a record deal six weeks later. That was it and away we went.

The worse you were, the easier it was to get a record deal.

That took us all the way up to 1993. We put a load of stuff out on Earache Records. Toured, had a bit of chart success and then in 1993 we packed it all in. No artistic differences, nothing that exciting. We all thought that was probably enough.

We never had any intention of doing it again. But then, out of the blue, in 2010 we got a phone call to say did we want to do a gig at the Alexandra Palace? So, [obviously] Yeah!

Why wouldn’t you? So we did that gig. But there was never any intention of reformation. It was a gig we should never have had, but Andy Copping from Download was at the side of the stage. He said: “Don’t go on holiday, lads, I’m booking you for Download“. And we laughed, but he did book us and that was that.

Now, people keep booking us! And we kind of seem to have come back.

All luck, mostly by error and certainly none of it by judgement, I would suggest.

P3dro: We first came across you when you got a mention on Simon Mayo’s show on Radio 2

Pete: Again, this was luck. Kerrang magazine used to do a feature called: “Is this your face in the crowd?” It was a photo taken at a gig and if it was you, then you could win a lot of goodies. They used a photo of us at The Marquee and a kid on the front row said that was him, so he was sent a load of swag.

Some years later this kid confessed on the Simon Mayo show that it wasn’t him, but he’s bagged all the goods anyway. Good for him!

So, then Simon Mayo started Googling and found out were a real thing. My phone was going into meltdown with people messaging me from traffic jams around the M6 to say we’d been on the radio.

Then Mayo’s office wanted me down there the next day, so I went and we had a lovely chat, about The Ramones. It was great, but consequently we kept getting airplay on his show – which is ridiculous, isn’t it? But, then we ended up doing a theme tune for his show.

This is what happens. We lurched from accident to accident.

P3dro: How long has Kids In America been part of your set?

Pete: I had hair and more pairs of shorts back then. That goes back to about 1989. It was the first time we’d been to a proper recording studio, having signed to Earache. We were sat having dinner one night and ‘Kids In America’ came on MTV. And one of said that would make a great cover version – imagine what we could do with that! And that was it.

Then we went to an even nicer recording studio, The Manor in Milton Keynes. Public Image were there next door, so it was great. We recorded ‘Kids’ and it did alright as a single. It was fairly notorious, got us loads of airplay and was a bit of a minor hit. It just about scraped 90-something in the national charts.

We just became synonymous with it, I guess. And probably, because of [Kim Wilde].

The whole thing glued together much later on, though, when she spat it out on national TV that it was her favourite version.

And, then many years later, I got to meet her and we ended up doing stupid stuff again.

P3dro: We were watching the video of you and her at Download the other day. That’s what prompted us to message you.

Pete: That was fun! A load of our fanbase had been badgering her on Twitter and she was taking it all in good spirit, because that’s what she’s like. So, I messaged her and said: “If they’re bothering you, then I can only apologise”. And she messaged back to say: “Do you fancy doing a gig?” So, I went down to London to meet her for a couple of drinks and she decided she would come and do Download with us.

And the reaction was amazing. It went off the charts. I still don’t think anyone believed it was her when she first walked out. And then they realised we’d pulled off some moment of lunacy.

And then we did one of her shows and played Manchester Ritz with her. We ended up with this bizarre bill of Kim Wilde, Toyah, Carol Decker and us! And, you can imagine the reaction to us, can’t you?

P3dro: Have you been teasing some new material in the wings?

Pete: Yeah, we’re teasing and we have [new material]. I can say enough, and not enough. We’ve just signed a new deal, but it hasn’t been announced as yet, so I can’t say who we’ve signed with. We have an album in the bag that just needs some vocals finishing and then it’s off to “a named producer”. So, that’s somebody else’s career we can probably wreck as they try and make us sound half decent. It should be out at the back end of this year.

P3dro: How was that recorded? In a studio, or at home?

Pete: It’s been torturous. Recording at home has been the worst fucking experience. I hated it. So, it has been done, in three locations, but it’s just horrible. It’s bare your soul stuff and then you send a load of tracks back down the pipe and they come back and say: “That’s crap, can you do it again”. You end up pedalling around in circles to the point where it’s soul destroying.

In the end, with the barriers down a little, we got some bits done in the studio. We’ll do it again in two weeks time and then it’s done from our side.

But I look with a wry smile at those who talk about Covid jolliness and the joys of recording at home. It’s bloody horrible. Long may I never have to do that again.

I’m way too old to be doing this shit anyway. When you’re in a room together you can just burst out laughing and then do it again.

P3dro: Have you got any gigs lined up?

Pete: I keep watching the migration of gigs. You book a gig and then you watch it move. And then again. Our first outing is in July, although that seems a bit optimistic, but you never know. We have Garage in London booked for December, so that should make it, but then it’s [2022]. There are a couple more booked that haven’t been announced yet.

P3dro: Yeah, you’d rather hope December would be OK.

Pete: Even the young’uns should have had two jabs by then. And we should be good to go. That will be the first indoor one, with beer and getting sweaty, so it should be fun.

P3dro: Recommend a band or an album we should be listening to right now.

Pete: Oh, ask an old man what we should be listening to!

I was playing the K Division 93 album the other day. I’m liking that. The Jaz Coleman, Peter Hook and Geordie Walker album that seems to have been found from under the floorboards from about 30 years ago. That’s worth a listen.

I’m also listening to a lot of Royal Blood and Monster Magnet as well. So, any of those. All good.

Other than that, then you don’t want to know.