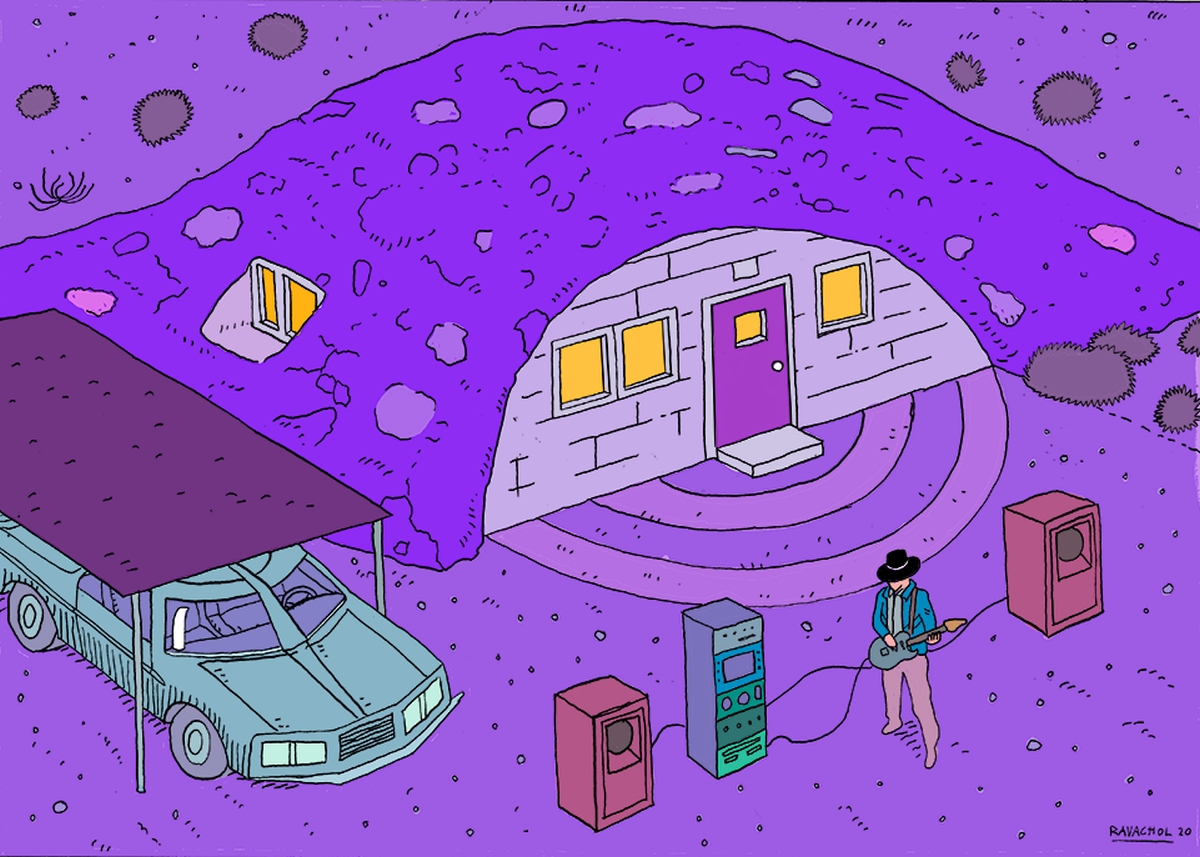 The enigmatic and camera shy Johnny API shares his CAPS LOCK fortune and making music in the desert. Intrigued? So are we.

Over here at P3dro, we get lots of PR emails and missives from artists plugging their various wares.

It’s cool, we like they do that. We never know what will arrive.

Often ignored, sometimes, just sometimes, there’s one that makes us pause before we hit the delete button.

But, we were intrigued by the email subject line – Greetings From The Desert. He made his point with the embedded graphics and the attached tune, Easy.

To us that song title is Lionel Ritchie and the rather fab cover by Faith No More.

But this was not that song.

Johnny API had done his job. He made us retreat from the delete button. We span the tune and we were more than impressed.

He won’t tell us who he is and he doesn’t give much away, except for the colour of his night sky.

We pressed on regardless.

P3dro: Tell us about Johnny API. Introduce yourself.

Johnny: Hello good people, my name is Johnny API and I live in the desert, east of LA because it’s cheap, or at least it was until the pandemic. I used to work in Silicon Valley but I got sick of all the bullshit and moved down here.

P3dro: We understand you have a studio set up at home in the desert. Can you describe it to us? What kind of gear do you have in there?

Johnny: Calling it a studio is probably generous as it’s 12” x 15” room but it’s my place of refuge.

I’ve decorated it with a lot of bold colours, posters, and a big red Navajo style rug. And there’s an old school map of North America on the wall that’s so old that it refers to Honduras as “British Honduras”.

For instruments, I have a total of 10 guitars, basses, and other miscellaneous string instruments, only half of which are in tune at any given time. My favourite right now is a sea foam green Telecaster. I also have a Deep Mind analog synthesizer of which I am still learning the ins and outs. And of course a variety of midi controllers.

P3dro: You mentioned that the studio is sufficiently remote, the neighbours don’t complain. How far away is your nearest neighbour?

It’s glorious. There’s no light pollution so you can see all of the stars and there’s often a purple hue to it.

P3dro: What drives you to make music? As far as we can tell, your only public digital release is the single ‘Easy’ on Youtube, iTunes etc. Have you released any music on other formats? Is there anywhere else we could find your work?

Johnny: I’m not certain what drives me to make music, I just know that when I open up and sing stuff always comes out, a lot of of which I am often not even aware. And I have to keep making t because otherwise I feel like I don’t exist. Perhaps that will pass but it’s been true for a long time.

More songs are coming soon on Spotify and all of the usual suspect platforms.

P3dro: What triggered the decision to release that song?

Johnny: Honestly, because it was finally done. Releasing music is almost like some sort of karmic house cleaning.

P3dro: Give us a bit of insight into your recording process. Do you work solo all the time, or do you have others in to collaborate with you?

Johnny: Typically I write the “bones” of the song on my own such that I can play it from start to finish on guitar.

Then I lasso in a few different collaborators I have around the world, depending on what sound I need. I’m always looking for new people to work with fwiw.

P3dro: Do you play live? Do you have any plans to do so?

Johnny: Not yet. I’m working on that. I will likely do some streaming performances soon.

Maybe as my 2D self but also looking into a motion capture system that will let me turn my 2D self into a 3D self. This all ends in holograms touring the country, I suspect.

P3dro: Are we going to hear any more music from Johnny API? Do you have plans for more singles, an EP, or even an album?

Johnny: Yes, 3 more songs are coming out shortly. And then hopefully a bunch more in the new year.

P3dro: Who are your musical influences? My partner thought ‘Easy’ had a bit of an R.E.M. feel about it – would that be fair?

Johnny: I am deeply flattered by any comparison to R.E.M. There is just such a depth and poetry to Michael Stipe’s lyrics and the band has great musical chemistry.

In terms of influences, right now I am primarily listening to records from Eno, Tinariwen, and HAIM. So God knows what my new stuff will sound like.

P3dro: If you could go to a gig right now, anywhere, present past or future, which band would you see and in which venue?

Johnny: You got me thinking about R.E.M. so I’m going to say a double-bill of R.E.M. and The B-52s at the 40 Watt Club in Athens, Georgia in 1984. I want to come out of the show and feel a slick of heat on my skin. Then probably go to Waffle House.

P3dro: Recommend a band or an album you think we should be listening to right now.

But if you want to hear something disconcerting, checkout ‘I Scare Myself’ by Dan Hicks and his Hot Licks. It’s like David Lynch learned flamenco.

P3dro: Anything else to declare?

Johnny: No, and there’s definitely nothing in my carry-on.

P3dro: Dude, we need to hear more from you. XX

Edit: Johnny emailed a couple of days before Xmas to say he has now released the rest of the EP available at the usual places. We think it’s a great piece of work – definitely worth a spin from the links below.