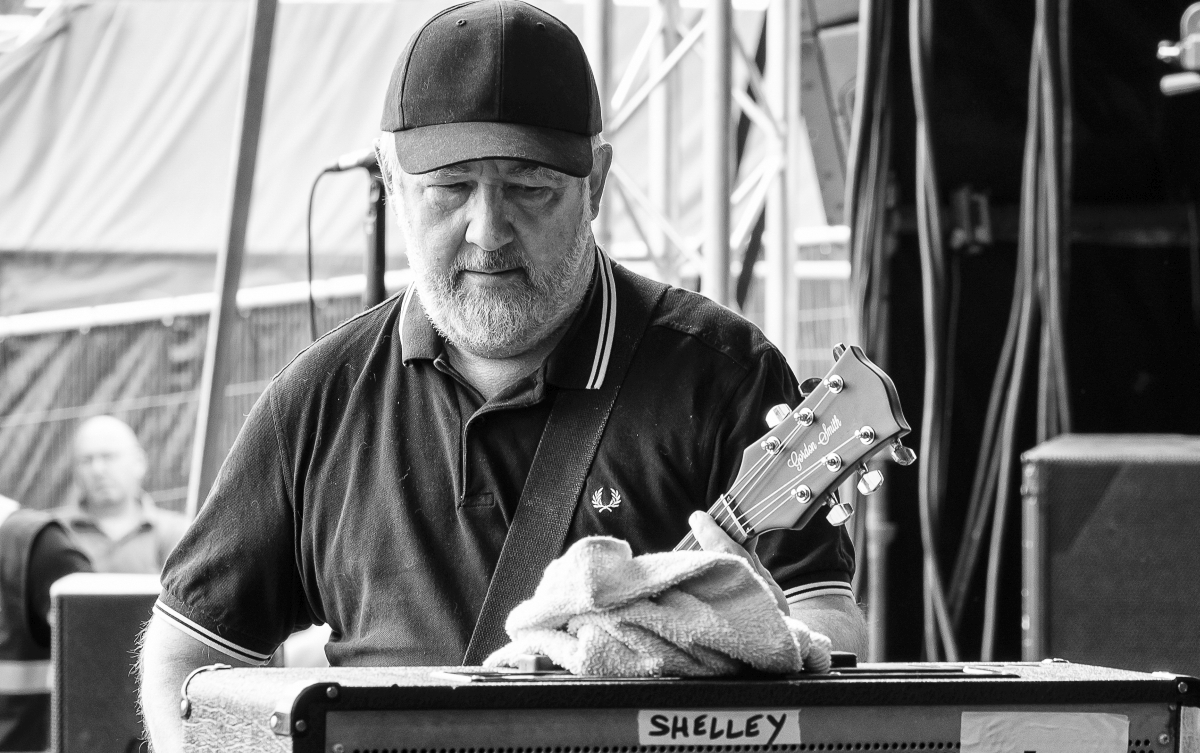 Buzzcocks’ Pete Shelley leaves a massive legacy of words and music, an ambitious project to raise funds for a memorial to his life is revealed today, with the announcement of a split 7″ from Klammer and The White Ribbons.

Buzzcocks are one of the hardest working bands. Even after the heyday of Punk was waning, the band carried on. Gigging and writing songs.

Pete Shelley was a driving force behind the band and his death in December 2018 was a massive loss. It was debatable the band would ever play again without him.

He leaves behind a huge legacy of some of the best punk / pop songs that span at least four decades. Three minute bursts of energy and aching lyrics were his trademark. But there was more to him than that.

It seems entirely right his mark on music history should be honoured and to that end there is a campaign running to raise funds for a Pete Shelley memorial to be set up in his home town of Leigh, near Manchester.

As part of the fund raising effort Peter Hough, who runs the Buzzcocks fan page on Facebook, The Secret Public, has organised a tribute album release in Pete Shelley’s memory.

To be called Yesterday’s Not Here, this ambitious project will be a digital album to be released around Christmas, each track being a cover of one of Pete Shelley’s songs. The only criterion, when asking for contributions, was that the words and music had to have been written by Pete Shelley.

Otherwise, the contributors were given free rein to do what they wanted. Cover in any way they liked – spoken word, or re-mix the original, or stay faithful to Buzzcocks’ classic punk ethos.

All the bands, photographers, designers have donated their work for free, to support the Memorial Fund.

As a teaser for the December release, today sees two tracks released on a physical clear vinyl 7″ available from BandCamp. There’s You Say You Don’t Love Me from The White Ribbons and I Don’t Know What It Is from Klammer. (As we write this piece, the first pressing is sold out – don’t worry, there will be a second issue, albeit on black vinyl)

Both are perfect in their own way. One, a faithful cover of a Pete Shelley song, the other a stamp of a new feel to the tune.

We have an exclusive listen of both tracks from Klammer and The White Ribbons – for now, this is the only place you can hear them, unless you snagged a copy of the physical single.

Talking about the project, Peter Hough said he was delighted and surprised about how quickly the first issue of the single had sold out. That’s an indication of the love there still remains for Pete Shelley.

He explained the idea of the project by saying Pete Shelley was: “Unique in the friendship he made with his fans. He was an understated pioneer. He created an atmosphere around him that there was no real point in talking about stuff – just do it. That DIY kind of ethos persisted and it was only after he died, people realised how important that was.

He had a very diverse musical taste. A lot of his solo work was very different from the stuff he is best known for. He inspired people in lots of different musical genres. It’s only now we’re really understanding what a foot print he left.

Punk was an enabling mechanism [for him], but he was never constrained to that narrow definition of punk. He was much more than that. He had lots of musical tricks. He made the unexpected seem obvious.

I thought it would be great if we could capture all the love and energy that Pete left within the musical fraternity and get bands to contribute. So, I thought it would be a good idea to see, as a fishing expedition, really, what people could come up with. I had a suspicion it would be just fans with bedroom recordings. I was completely wrong. The song choices were quite esoteric and out of what you could call “The Pete Shelley mainstream”

I didn’t want to come up with 15 versions of the 70s hits. And I’m delighted the songs submitted have been very closely matched to Pete’s musical interests. On the final album there will be some completely off the wall electronica, there’s some spoken word, as well as some guitar punk music.

All the bands came on board with the understanding that they are free to use their tracks in their own way, as are we, to promote this project. All the songs are properly licensed so they benefit Pete’s estate, who have given their full blessing to this.“