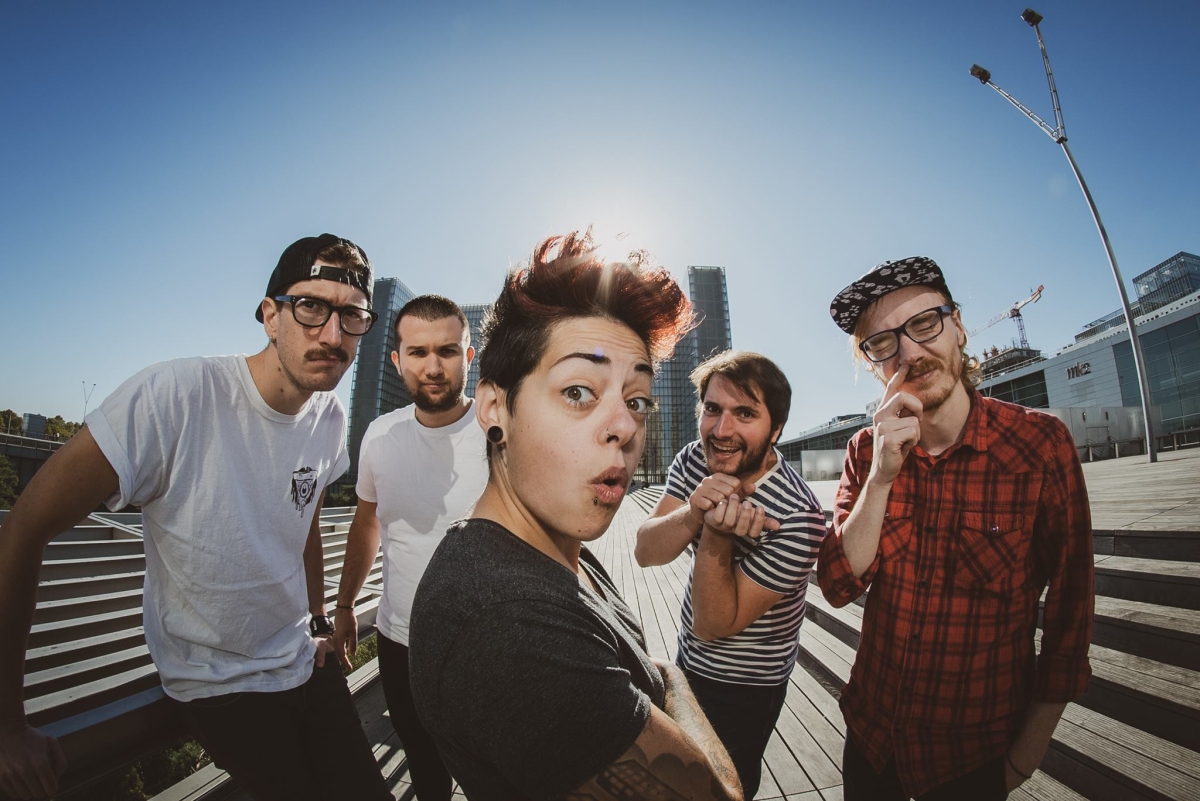 Penny Was Right are another Rebellion casualty who didn’t get to play Blackpool this year. We were intrigued, though, and wanted to find out more.

The Rebellion Introducing Stage CD continues to throw up gems the more we listen to it.

Latest on our hit list is Parisian outfit Penny Was Right. Their 2018 album Dumb and Wild is a slice of American style punk and we’re rather keen on it.

So, as is the way these days, we fired up Zoom and had a word with lead singer, Dalia and guitarist Loïc from the band to see what they’re up to.

Loïc: Right now, I’m home and doing an interview with you, Peter.

Dalia: Well, I’m at home and doing an interview with you.

P3dro: Tell us a little bit about the band. How long have you been going? When did you form?

Dalia: I created the band five, seven, six years ago? I don’t remember. We’ve changed the line up a bit. Cara, our other guitarist, [joined the band] and then it was Clément, the bassist and, then Loïc. We have a brand new drummer called Alexi, who joined us just before the Covid stuff.

So, we have been playing altogether since about February. It’s nice for now to have a new friend in the band.

P3dro: How do you describe the style of the band? What do you think your music sounds like?

P3dro: Do you have any kind of ethos? Any message you’re trying to get over?

Dalia: We don’t have any message.

Loïc: Our message is to have fun and drink beer.

P3dro: You would have been at Rebellion this year, that must have been a big blow to you when it was cancelled.

Dalia: Yes. Definitely. We were really sad about it, but we totally understand why. We were happy to be in the online version. That, at least was nice.

P3dro: Have you been to Rebellion before?

P3dro: What do you know about Rebellion?

Dalia: We only knew that there’s a lot of big bands, as well as small bands that come to Rebellion each year. We would have been really happy to have been a part of it.

P3dro: How did it come about that you got the invitation?

Dalia: We had an email.

Loïc: Someone recommended us, and they said “We like your style, so come and play Rebellion“.

Dalia: Yeah, they contacted us.

P3dro: It’s more than two years since you released an album. Have you got plans for any new music coming up?

Dalia: Yeah, definitely. We are working on a new one. We have already 7 or 8 songs and we plan to record it in January or February, something like that. We really want to have several songs as the best ones and then record [the album].

P3dro: How has the last 4 – 5 months been with Covid? Have you been able to be creative?

Dalia: Not at all. We wrote some songs just before the Covid started, but during the last 4 or 5 months we’ve just recorded at home to make some changes wit the different instruments, or the lyrics, and that’s it, pretty much.

We didn’t get as creative as other bands.

The thing is, like, we’re 5 geeks, so during the last months we stayed at home and we played video games, we watched Netflix and stuff like that. Mostly.

P3dro: What about gigs? Did you have any planned? Cancel many?

Loïc: We don’t have any gigs for the moment. We had some in the summer that were cancelled, but for now we don’t have any. We will try to focus about writing the next album.

Dalia: We don’t have plans for gigs next year. For now we’re trying to stay focused on the new record. We really hope to go in the studio and the do all the stuff to [needed] so we have something great to present to people in September, or maybe July.

P3dro: What does a typical Penny Was Right gig sound and look like?

Dalia: A real mess. I’ll say it’s five friends on stage, making punk rock in the dumbest way. I mean, we take the music seriously, but we’re not taking our gigs seriously – we’re having fun and we want to share this with our audience. We make jokes, we have fun.

Loïc: We want to entertain people as well.

P3dro: What kind of venue do you prefer? The small gigs in bars or bigger stages?

Dalia: We don’t really have the choice.

Loïc: Actually, we did some really big gigs.

Dalia: Yeah, but with no audience. It was at the beginning of a festival – we opened it – and there were, like 10 people. The stage was really huge and it was really weird.

P3dro: Where do you think you get your musical influences from?

We have a huge range of music.

Loïc: We are really big on blues, garage, grunge, metal, experimental music. We mix everything to make [our] punk rock.

P3dro: I think your album has quite a US punk feel about it. Is that fair?

Dalia: Yes, totally. Our main influences came from the US. We’re all fans of The Offspring or … [Zoom issue], Yeah, it’s fair.

P3dro: Will the new album be a similar sound? Or are you shifting?

Dalia: We’re not shifting totally, but I think it will be more adult. For the last one, we were teenagers. Now we have just reached our 20s. It’s more …

Dalia: It comes from several points of view. It appears to be easier to create like this than before.

Before we had one guitar player who would bring all the [songs] and then we would work around that. Now, we all come with something. It’s very nice this way.

P3dro: Tell us a bit about the music scene in Paris. How are things bearing up?

Dalia: Good question. For now, I’ll say it’s asleep. In France, in general, punk rock is not really A THING. It’s more about pop and stuff like that. So, it’s really hard for us to find gigs in Paris.

Also, there are a lot of bands and not that many bars or other places that want to have gigs, so, yeah. There’s not a lot of punk rock bands in France for now.

There are a lot of bars and small venues that have closed – it’s a hard time for them.

P3dro: Can you recommend a band or an album that you think we should be listening to right now?

Dalia: I’ll say Bring Me The Horizon. They’re my favourite band. I’m not sure if the others will be OK with that, but it’s [my choice].

P3dro: Anything else to declare?

Dalia: Yeah, stay tuned for the next songs.