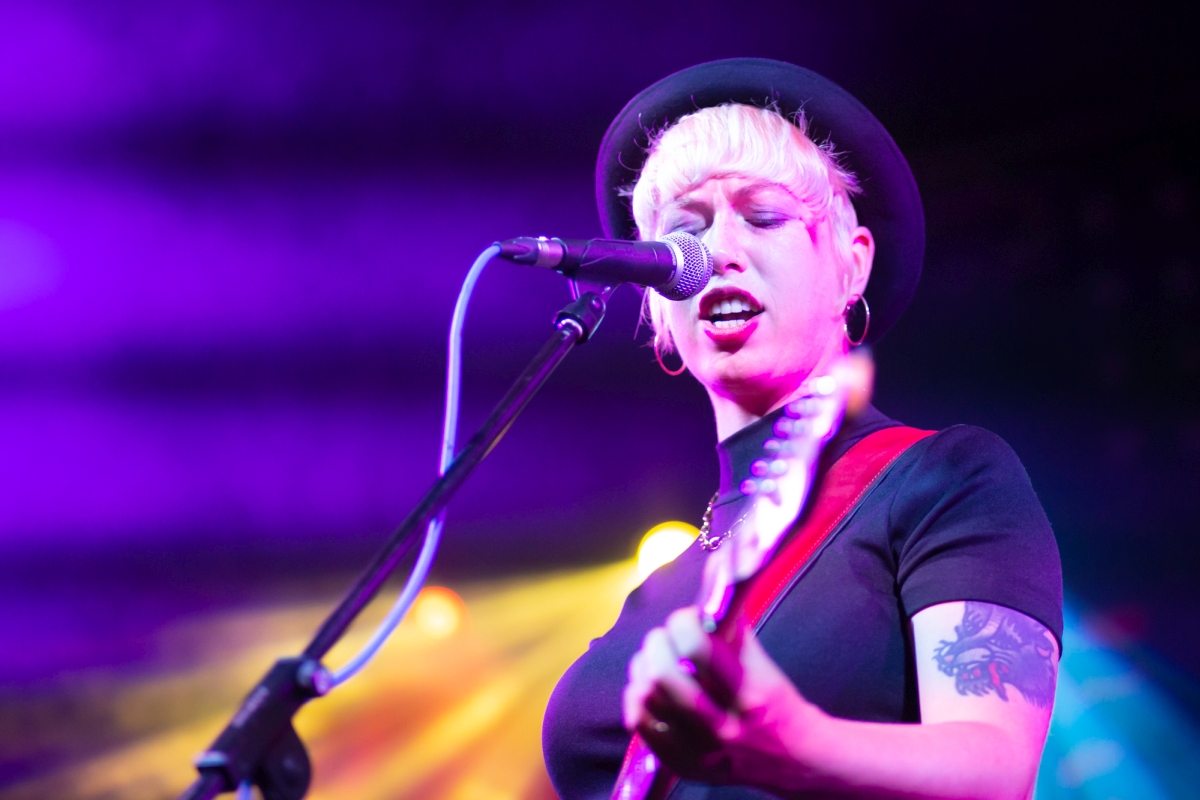 Kiss Me, Killer were a highlight of the last two Rebellion Festivals, in the absence the gathering in Blackpool, we had a talk with Cat from the band.

Bristol has a thing about punk. The home of bands like Vice Squad and Chaos UK, it has an impeccable pedigree.

But there’s a new breed and we just kind of think Kiss Me, Killer, may just be leading the charge.

We first saw the band at Rebellion in 2018 and then again in 2019, following a line up change after previous lead singer, Holly, left to pursue other projects. Both times the band was a highlight of the weekend.

So with rhythm guitarist, Cat, taking over the lead singing role, Kiss Me Killer became a 4 piece – onwards and upwards.

We had a chat with Cat on the phone. We’re not sure we caught her at an ideal moment, nevertheless, she was happy to spend some time.

Cat: How you doing, Peter?

Cat: Grand, but we’ve had a busy morning because our boiler has given up. It’s one of those gas combi ones. My flatmate is saying “Try this, Try that” and I’m going “No”. I’m paranoid about it blowing up. It’s making mad loud noises.

P3dro: I don’t know whether you remember, but we’ve met before. I spoke to you outside the Winter Gardens.

Cat: Yeah, I do. It seems like a million years ago, now.

P3dro: I think you’ve probably told me the answer to the first question we usually ask at an interview, but where are you and what are you doing?

Cat: We’re in Bristol. We have our first practice since before lockdown this coming Sunday, which is really exciting. I’ve been working from home throughout. But music-wise, I’ve found it hard to be creative, it’s such a strange time.

But I have managed to meet up with our guitarist [David] in the park a couple of times to try and write some songs, which was successful enough. But he has two young children, so his priorities at the moment are looking after them.

We weren’t planning on playing Rebellion this year, but we did have lots of other gigs lined up.

P3dro: I first saw you playing the Introducing Stage in 2018, with Holly, and then [the bigger] Pavilion Stage last year with you as the singer.

Cat: Yeah, that Pavilion Stage gig was, I think, our third gig with me as the singer. We’d only had about 6 practices with the new line up, so it was all quite rushed, because we had Rebellion booked and we wanted to do it.

The last gig we did before lockdown was The Squat Party in Bristol, which was amazing. But looking back now, I can’t believe there were so many people crammed into such a tiny space. It was a good way to go out as a last gig.

P3dro: Did you know at the time it was going to be your last gig?

Cat: There was that sort of feeling in the air. It was, maybe two weeks before lockdown; the weekend before lockdown we were supposed to play in London at Grow Your Own Records Fest, but the day before, our guitarist [David] started having flu like symptoms, so we made the decision to be careful and not go.

P3dro: What did you think of Rebellion? How do you describe the Rebellion experience?

Cat: It was great. It’s just so good meeting up and seeing people. First of all, the line up [offers] something different for everyone. You get to see bands you’ve loved all your life – great bands all in one place. Blackpool is great, I love it, it has so much character.

We had a positive experience. We were on first [on the Pavilion Stage], but we still managed to draw a decent crowd. It’s always nice to get away and play, and get a little holiday out of it.

Our drummer, AJ also drums for the Menstrual Cramps and she was feeling a bit anxious because they had been getting a lot of online abuse and hate thrown at them.

The band is very outspoken about not putting up with any form of racism, sexism. They take a stance at that, but they had a backlash.

Even so, we still had a great time. We loved being backstage and meeting other bands as well.

P3dro: Who were your highlights from Rebellion last year?

Cat: Masked Intruder were fantastic – they put on such a show. The Menstrual Cramps are great (Ha!), Hagar The Womb. Gosh, it all blurs into one. Stiff Little Fingers – that was amazing. I’ve loved them since I was, you know … 15, growing up in Ireland. I can really relate to their tunes. Subhumans were amazing as always. I caught Steve Ignorant as well. They were probably the highlights – I could go on all day. There are so many good names there.

P3dro: You say your music has changed and developed. Tell us a bit more about that, in what way has it changed?

Cat: When Holly was in the band we had a more heavy, metally sound. Whereas now, David and I tend to meet before we go to practice and come up with some tunes. I’ve written some of the tunes as well, bring them to David and it kind of develops from there. He works on it and comes up with a proper structure. He’s a brilliant guitarist – he has a whole bank of tunes and riffs in his head at any one time.

Or, I would write some lyrics and bring them to him and say I want it to sound like this. We click really well.

Some of our newest songs are a bit more comical or funny. They have a sense of humour to them. We have one called “Kevin the Kitchen Crab”. There’s one we wrote called “Getting Wrecked in Sports Direct”, which is actually about zero hour contracts. And then we came up with one called “Ego Lycra Cycle Man”.

But we still have some of the more serious songs, but also making songs that you can dance to a bit as well. [Songs] that have a high energy.

P3dro: What about influences? The Beware EP you released when Holly was the singer is quite heavy, but then it has Och Aye at the end of it, which almost has a folk feel to it. You’re not afraid to mix it up a bit?

Cat: No, definitely not. One of my favourite bands is The Pixies. We all love The Cramps. We like trying to have, a sort of, the weirder, the better and to experiment with the newer stuff as well. To try not to have a specific sound. I love The Pixies and how their songs are so varied. You can put on an album and one song might be really, really fast and then another might have a really strange structure.

But, we still use quite heavy guitars.

Cat: Oh, it’s fantastic. There’s really something for everyone here. The punk scene, in particular, is thriving. It always has been. There are old bands like Disorder still going and playing regular gigs.

And I guess, you’ve got Idles who have done really well and put Bristol on the map, again.

And then there’s the BIMM Institute [The British and Irish Modern Music Institute] and there are a lot of bands coming out from there, too.

There’s a real community punk vibe going on down here as well.

P3dro: You mentioned venues. Here in Liverpool, which is where I’m talking to you from, we have had a few venues close down recently. What’s the position like in Bristol?

Cat: There’s been a lot of crowdfunders for venues. No one I know of has, as yet, said “We’re not going to make it”, which is great. But, yeah, it’s such a worrying time, especially for some of the smaller venues who may not be able to survive.

There have been initiatives introduced where you can buy merch, or a voucher for whenever the venue opens again. But I reckon a lot of them are struggling to be honest.

We need those DIY spaces.

P3dro: I was looking at your video on Facebook for “Get A Lice”. I was amused by your T-Shirt that says “Make Bristol Shit Again”. What’s the story behind that?

Cat: It’s a local design artist who has done lots of T-Shirts, like GOD HATES THERESA MAY. He’s Bristol Street Wear. He just gave the shirt to my partner. It’s about all the gentrification happening in Bristol. It used to be shit and now the house prices are extortionate, it’s getting more and more “less affordable” to live here. So, if it was shit again, then people with lots of money wouldn’t want to live here.

P3dro: What plans do you have for new music?

Cat: We really need to get some recordings out there. We don’t have anything recorded at the moment [as the new lineup]. Our plan is to record from now and then hopefully have something ready by March next year. It’s just been a bit tricky.

We usually just record ourselves, so David would lay down the guitars, I’d record my vocals. Then AJ would go down to her Dad’s in Cornwall, where he has a drum recording set up for her, and then we’d put down the bass and get it all mixed. We’re basically just waiting for David to be able to have the time to do that at the moment, but we have everything ready to go. We’re raring to go.

We may get some live practice recordings up on Bandcamp, just so people can hear what we sound like now. The “Get A Lice” video was recorded just on my phone, so lo-fi. But recording is our main goal.

We’ve been approached by Grow Your Own Records who want to put us out on vinyl when we have something ready. Life has got in the way, we just need to find some time, now to record and hopefully release something next year.

Cat: EP. But we do have enough stuff for an album. The main focus is an EP right now. We want to record as much as possible now, and then, maybe an album next year.

P3dro: Can you recommend a band or an album that you think we should be listening to right now?

Cat: Yeah, I’m listening to Bob Vylan. They’re a two piece from London. I’ve just got their record and it’s amazing, so right on now with Black Lives Matter, too. The songs really resonate. You should check them out.

Something a bit different is Billy Nomates. They’re from near Bristol, kind of electronic, catchy songs.

They’re the two new artists I’m spinning at the minute.

P3dro: Is there anything else you want to tell us?

Cat: Hope everyone is keeping well and safe. I can’t wait to get back playing again and getting out to gigs.