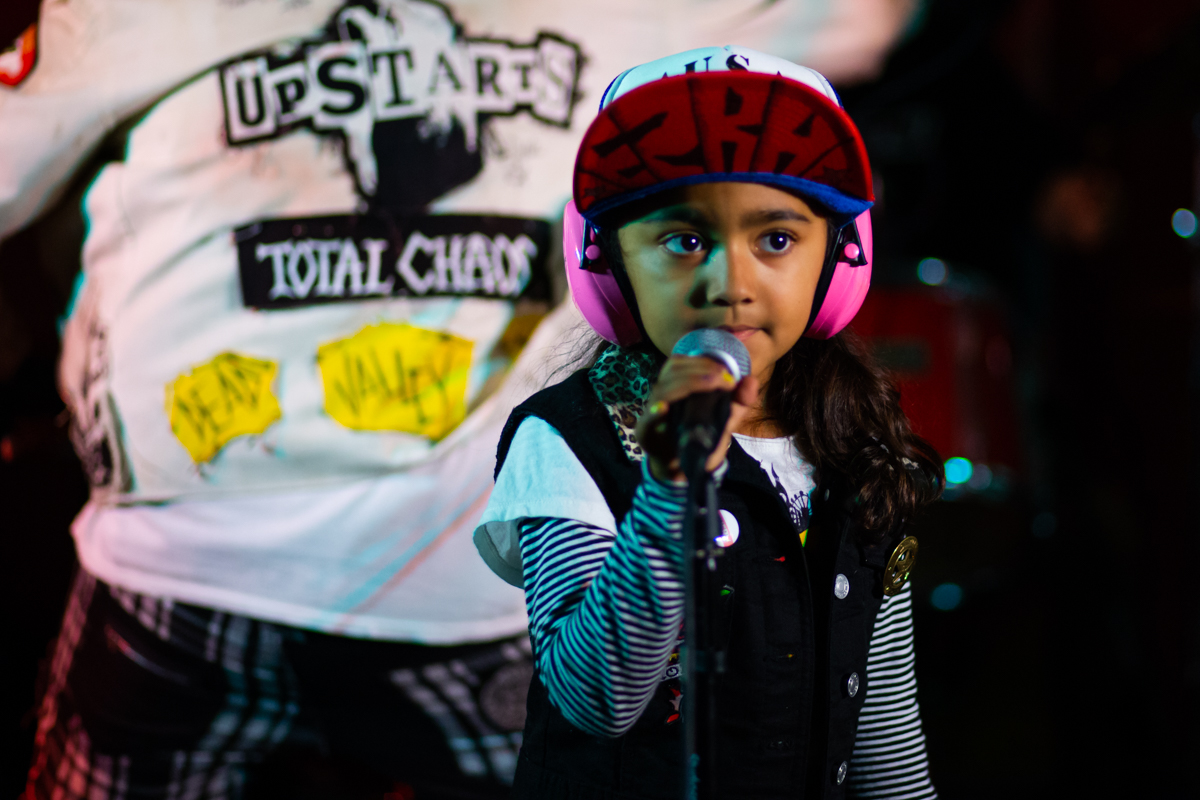 Infirmities shook up the Introducing Stage at Rebellion in 2018 with an amazing performance from Ezra Skye, we caught up with her Dad, J Hawk for a talk.

We would have been getting all excited for Rebellion Festival this upcoming weekend. But, clearly, not now. A familiar refrain.

One of the things we love about Rebellion is the discovery – their booking policy is pretty much flawless, so even if you’ve not heard the name of the band before, then the chances are they will be excellent anyway.

That proves to be the case on the Introducing Stage time after time and it became one of our favourite places to check out over the course of the weekend.

We hadn’t quite realised when we took the lead photo above in 2018, we’d captured one of Rebellion’s perfect moments.

So much for the headliners – Skids and UK Subs and all, they have the pedigree. But here in a room that holds, say 200 people was a band from California nobody else had heard before.

The band were good, of course, but the stage was being bossed by 5 year old Ezra Skye. Singing one minute thrash punk songs.

It was surreal, but mesmerising. And that’s where our relationship with Infirmities started.

So, in the absence of Rebellion, this year, it seemed an ideal time to catch up with J Hawk from the band and re-visit that most special of moments.

J Hawk: I live in Salinas, California. I’ve been a graphic designer for over 20 years. I’ve designed album covers for bands, logos. I do all kinds of different stuff for people in the music industry, for people who own their own businesses. I’ve had this business for a long time now. I go under the name Hey Mr Hat – when I don’t have my mohawk up, I just like to wear hats.

P3dro: Presumably, if you weren’t in Salinas now, you be on the way to Blackpool for Rebellion?

J Hawk: Yes, most likely. We’ve been there for the last two summers, 2018 and 2019, which you got to be a part of when you watched us perform. It had become the place to be every summer. We really enjoyed going out there and making new friends.

It’s always fun to tour out there. Last year we got to do other places too, we did Paris, Belgium and Germany. It seemed like every summer we went out there, we tried to cover more areas and we’d be out for maybe 2 or 3 weeks, making a tour out of it.

But, we’re over here, working on new material and writing a new album.

Since we can’t really play shows. It’s no different in California than it is in the UK as far as [lockdown is concerned]. There’s no live music right now.

P3dro: Tell us a little bit about the Rebellion experience, because I got the impression you were there not only as a band who was playing, but you were also a real fan as well.

J Hawk: Yeah. I think for anybody in a punk band – it’s like a dream to play something like Rebellion because you have a lot of your favourite bands performing, a lot of your influences. It’s an amazing opportunity.

I had submitted one of our songs a few years back and it seemed close – people seemed to like the music and we were getting all excited, but then when the bands got announced, we weren’t on the list. [Rebellion] said they were kind of maxed out, but maybe next year.

So for 2018 I got ahead of the game and contacted them really early, so, sure enough we got on. That was where we first met you, on the Introducing Stage.

It was huge for myself. I’ve been a fan of UK punk rock since I was a kid at about 11 years old. I think the first record I had was the Sex Pistols Never Mind The Bollocks.

I’ve always been influenced by the music that came out of the UK, so for me to be able to go there and bring our music was kind of like a bucket list thing – I get to leave my country and go to the UK – this is one of those things – I was so excited to do it.

And what made it more exciting for me and completely unexpected, although you were able to capture it with your camera, was that my daughter [Ezra] was excited about going to Rebellion.

Right before we went on stage, she asked me if she could get up and sing with me. I didn’t think much of it, But we’d come all this way and even though we hadn’t really rehearsed it – well, what’s the worst that can happen? So, she might as well come up for a few songs and we’ll have fun.

P3dro: This was when you were on the Introducing Stage?

J Hawk: Yes, it was, so what you captured was a very spontaneous, not planned, performance. It was something we didn’t rehearse with Ezra.

That’s what made it more amazing for me and the band. She literally went up there, went for it and attacked that stage. We didn’t see that coming any more than the crowd did. It was exciting – she was 5 years old when that happened.

She’d listen to our music in the car and kind of hum along to it. I knew which songs were her favourite songs, but I didn’t realise she actually knew a good 80% of all the words. I never realised until we were on stage together, with a mic, she’s not mimicking me, but [actually singing]. I’m trying not to look down to my left, as her Dad, in amazement. It was a real shock, both to me and the crowd at the same time. We kept going from song to song.

When we got off stage [Rebellion organiser, Johnny] said that was amazing and we have to have you back next year on the main stage. So, right away, I was just like “Wow, whatever just happened was magical” I don’t know if we would have been given the opportunity to advance to the main stage had it not been for my daughter jumping up there and doing what she did.

Sure, the music’s great, but we knew she was a big reason why we made the impact that we did. And then when we got off stage Ezra was signing autographs for people who were buying the records at the merch stand. It was neat to see that all happen – it wasn’t planned. That will always go down as one of the greatest memories for me.

P3dro: Yeah, it was a lovely moment. I kind of knew when I walked in that room, this was going to be the image of [Rebellion] that year.

J Hawk: It was crazy to see how she was taking control of the stage. She had one foot on the monitor, like a pro. She was just going for it.

P3dro: A little bit about life in general – you mentioned new music, do you have any plans?

J Hawk: Yeah, we’re going to be releasing our full length LP in 2021, which is pretty much a 30 minute set of music. Our band motto is “You miss 2 minutes, you’ve missed 2 songs”

J Hawk: Yeah, pretty much. I think there may be 26 songs in 30 minutes. Some people may think that’s crazy, but we just want to get it all out there on one album. We’ve released two EPs – whereas most bands will do that with 4 songs, we always gave people 8 [songs].

Because the songs are so short we can squeeze 8 onto a 7” EP. I always want to give more. The name of the full length album will be Brood of Vipers. We’re working on that and we’re also writing some new material, partially based on the lockdown and the situation we’re in right now.

We have a new song called Cell Block Earth, which is my interpretation as to how we were all locked down together on Planet Earth – we’re all sharing a cell block. Getting together with the guys has been more difficult than before.

Most of the band lives in different cities, but we are able to get together on Zoom and use other apps to communicate and send riffs – we just go from there and keep writing new songs that way. We’re doing our best to spend time with our families and kind of enjoy it that way.

P3dro: The last question – Is there any band or album you think we should be listening to, right now?

J Hawk: Hmm. That’s a good question. I tend to listen to a lot of the same bands – we get stuck with our favourites. There’s a couple of things that come to mind.

There’s a band from Salinas called Psychosomatic – they’re more metal, but have put out a couple of singles from their new album.

I’ve been listening to a lot of old reggae – some Jimmy Cliff and early Bob Marley. It’s relaxing. The time we’re living in can be stressful and I think in some sense those really rootsy and still political but mellow songs are nice to listen to.

P3dro: Anything else you want to tell us?

I really hope live music will return in the way we remember it, but it doesn’t seem that way. The whole experience will not be the same. I think virtual platforms, like what we’re doing right now, podcasts, live streams – we’ll see a lot of that for a while. We don’t have any other way to connect.

One thought on “Infirmities talk Rebellion, one minute songs and their amazing Blackpool debut”